About seven years ago I picked up IT consulting to keep my pockets padded in high school, and frequently worked small jobs with SMB clients in my sleepy hometown. I’ve been out of the business for a while, but got a text from a client requesting security support for an incident where their email was used to send out a bunch of malware-laden emails. So, I pitched in a few hours and had a fun security adventure refreshing my knowledge on the ambient nightmare that is email security.

What immediately struck me about this was that despite targeting a very small business (10-20 employees), this malware campaign was exceptionally well-done. From initial compromise all the way to delivered emails, every part of this attack was executed using modern techniques, minimizing the chance that emails from this campaign would be detected and stopped.

This post will focus principally on discovering, gathering evidence for, and responding to a potential email security issue. To throw a wrench in the information machine, it’s an all-remote task without access to impacted systems - only written and voice correspondence with a few ex-clients - so we’ll have to carefully establish our claims throughout.

Where possible, I’ve made this batteries-included for security beginners and attached screenshots, text dumps, etc. so novice security engineers can learn more about email-based incidents. All information has been sanitized to maintain the privacy of impacted clients. So, let’s jump in!

On the morning of May 28th, 2020, a former client of mine has a potential incident happen with their email. We’ll call them Alice. Alice does a lot of client-facing work with their email, and so they can’t afford to have serious disruptions to their email (such as getting blacklisted for spam/malware). A couple of Alice’s contacts gave them a call to say they had a suspicious-looking email bearing Alice’s name, signature, and sending address in their inbox - including a mystery attachment they didn’t want to open. Alice took excellent next steps, including:

At that point, Alice reached out to me over text and email, sending a copy of a suspicious email one of their clients forwarded back to them. After removing their personal information, it looked like this: 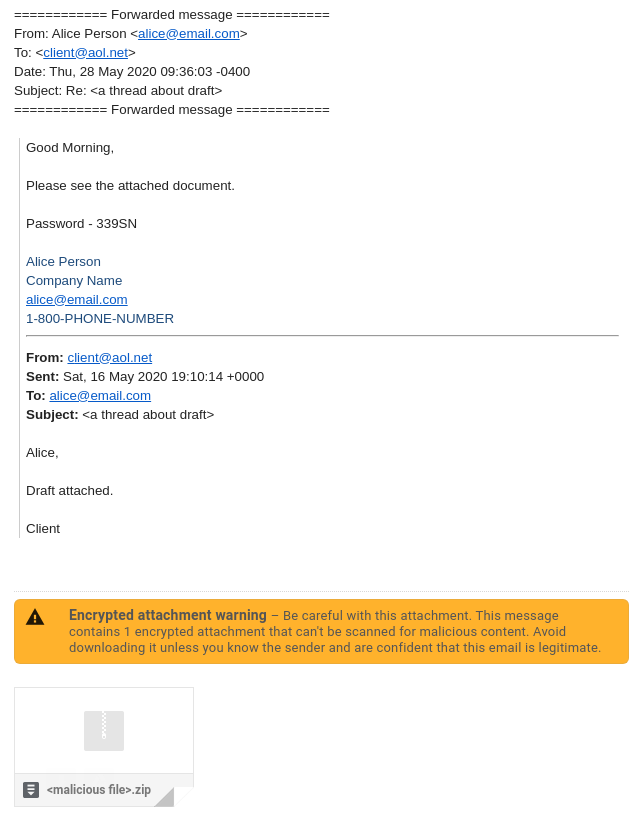 It was simple, but well in-line with Alice’s normal formatting and had a pixel-perfect signature, both the format and details were correct. We couldn’t establish whether or not all the other emails that went out were similar - since we could only see the one - so I began to investigate and rule out potential attack vectors.

Right then I actually didn’t have too much evidence of an incident that directly impacts Alice’s account integrity. Something, somewhere, managed to send a nasty-looking email attached to what appears to be an existing thread, but how? Does this represent a breach, or is it just a reputation-tarnishing drive-by?

Email itself has exceptionally old roots from the era of ARPANET, and while it has been slowly carried out of the dark ages, security extensions for things are not implemented universally.

The core problem that’s troubling us here is this: Simple Mail Transfer Protocol (SMTP, the forwarding component of the store-and-forward model) permits any computer to send email claiming to be from any source address. You read that right. Without additional technologies we’ll talk about in a second, any computer can claim to be any source address. Can you imagine the chaos of one hundred state-sponsored threat actors vying for attention using @POTUS on Twitter? No? Email has been around and (at a basic level) mostly unchanged since before we could have conceived of any of that as a problem, and no matter how much I dislike it, that is generally as good a testament as software can get to its tenacity.

So if you don’t want people to issue emails claiming they’re you or, whoops, government agencies as easily as renting a VPS with adequate sender reputation, there are few protocols you can implement to protect your email server. Principally, these are Sender Policy Framework, DomainKeys Identified Mail, and Domain-based Message Authentication, Reporting and Conformance. Taken together, these frameworks give email stronger fraud protection by:

Checking Alice’s email servers: SPF, DKIM, and DMARC are supported. However, the DMARC policy is none, so SPF or DKIM failures will not result in quarantining or rejecting emails by recipient mailservers. However, there is a silver lining - just the presence of DMARC allows mailserver administrators to track potential misuse. While Alice’s service provider should have been alerted to these if it was forgery, security metrics and alerting aren’t guaranteed to be implemented or error-free.

So at this point it’s possible that Alice’s email could have been forged. Their DMARC policy would allow a forgery through unless the recipient had enabled strong anti-phishing protections, since email providers tend to honor those settings normally. Forging emails which are “replying” to fake threads is also a well-known method for malware distribution and spearphishing campaigns, so it’s possible this was a series of minor security mistakes rather than a compromised account.

That all said, I had a nagging suspicion about Alice’s signature. All of that information was public knowledge just an internet search or two away, and Microsoft Office’s signature navy text wasn’t uncommon for signatures, but it was too perfect - the right font size, the right spacing, the right order for information. If we can confirm that the thread itself was not forged, we know that a compromise has happened somewhere, but we’ll need some more data.

On a hunch, I reached out to Bob (another former client) who had connected Alice & I some years back to find out if they’d received “any” suspicious emails today. As luck would have it, they did receive an identical email from Alice that morning: a reply to an existing thread which looked exactly like Alice, but sounded a little suspicious, and had an unexpected encrypted attachment. It had the same format, but a different thread (one Bob confirmed definitely existed before), so it was time to look more seriously at vectors to get in to Alice’s account.

Since email header information is rewritten by most servers and not preserved anywhere, getting an original copy was the only hope of finding out more about where these malicious emails came from. I was able to walk Bob through dumping the malicious email to .eml in order to preserve its headers, and was rewarded with a wealth of information. Let’s take a look, starting with a selection of the headers from the malicious email:

The rest of the headers are available here as well, but unfortunately it’s clear: something logged in to Alice’s SMTP server as an Authenticated sender: for Alice’s email. This is certified by the SPF and DKIM information - while SPF is ‘neutral’, the DKIM signature was valid and correct, so Alice’s email server had signed the email.

Interestingly, the listed connecting IP (172.223.74.245) is a residential Spectrum/Charter address per its WHOIS and has a clean bill of health - no suspicious ports open, and no appearances in public threat or spam feeds. The only thing amiss is its presumed geolocation - while this can be inaccurate, it’s reported as Cleburne, Texas, USA by all major GeoIP services as of writing - far from NY, USA.

To confirm this is not likely malware on Alice’s machine (just in case GeoIP providers got this wrong), we’ll compare those malicious headers against Alice’s email headers (available here) from when they forwarded information to me:

Looking at the first hop, Alice’s email client is configured to use an Exchange server, and communicates first through MAPI, not over SMTP. Another note is that an X-Mailer header is listed claiming that the email was sent with Outlook v12.0 (Outlook 2007) - not Alice’s workplace’s email platform (Office 365, aka Outlook v16.0). Taking that information alongside the IP used to send the emails, it appears that the malicious email was most likely sent by a compromised residential machine.

Unfortunately for Alice, that’s also case closed: their email password has likely been breached, so we set up a call to make sure I didn’t miss anything and go over next steps.

It turns out that Alice had been receiving infrequent spam emails that were seeking a Bitcoin ransom to not reveal a phrase which was “close” to one of their passwords. This indicates the Alice has used password permutations before, or that some of Alice’s passwords can be easily guessed with personal information. Either way, they’re practices worth avoiding, so Alice and I talked through better password security practices.

There wasn’t much for me to help with that Alice, being the phenomenal client they are, hadn’t already done:

Additionally, I compiled evidence and sent a detailed account of the incident to Spectrum’s abuse team so they could notify the infected customer and (ideally) prevent further misuse.

No further email security incidents have occurred since Alice switched to stronger passwords. Ideally, Alice’s business would move to an email provider which supports 2FA and has stronger DMARC settings in the future - though I can’t complain much about their DMARC, they’re still doing better than 65% of the SaaS top 1000 were in 2018, a fine feat for a small and generally low-risk business.

But what was the malicious attachment all along? Our culprit was Valak - a modular malware which matured quickly over 2019-2020. It’s used by threat actors principally to target Exchange servers in the United States and Germany, sending phishing emails to any contacts it can find.

I am writing a follow-up to this article which will deep-dive on the significance of how this Valak-distributing campaign worked and a dissection of what makes it so special. Between the squeaky-clean IP reputation, using an source in the same country as the target for the attack, and excellent use of existing threads to dupe users - bullshit security “solutions” won’t last long in this advancing threat landscape.

Oct 20, 2020 — Help for Users Impacted by Infected Extensions
If 'User-Agent Switcher', 'Nano Adblocker', or 'Nano Defender' sound familiar to you, I might have some bad news. A malware operator I am investigating has escalated their operations and infected 350k+ users; here's what happened and what to do if you were one of them. Read more

Jun 7, 2020 — A Believable Attack Using EIP Cards
Turns out it would cost you between $1 and $1.50 in materials to pull off an EIP Card scam, plus procurement and assembly - the rapport you get from doing this is easily more valuable, and could be a viable attack in the real-world. Read more

Jun 6, 2020 — EIP Cards Made Fraud Easier
Who thought distributing debit cards in unmarked envelopes that predominantly reference a non-.gov domain was a good idea? I almost threw it away, then thought I had my identity stolen, then got so frustrated I wrote this post. Read more

Want more? Go back to the index!